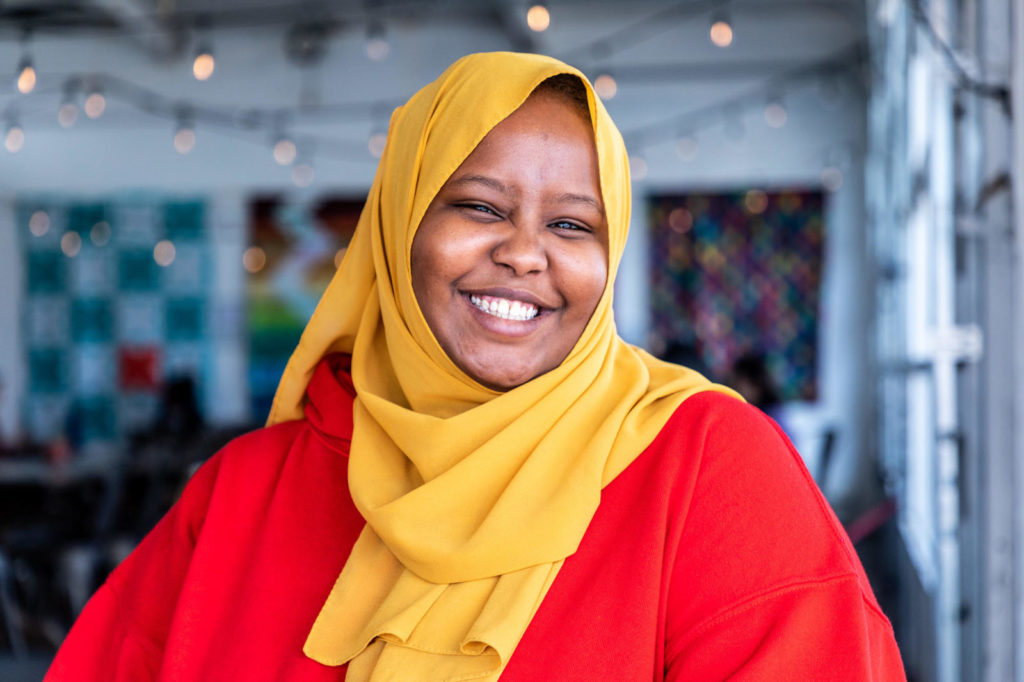 This weekend GVP released a beautiful video from Nasteho, one of our incredible and inspiring GVP alumnae. She was recently recognized as a Posse Scholar and was accepted at George Washington University in D.C. Nasteho had originally agreed and planned to speak at GVP’s Tribute to Education event that would have taken place this past Sunday but instead allowed us to create a video to share once we knew that Tribute could not go on as planned. Nasteho, a senior at Druid Hills High School, also joined our new Alumnae Advisory Council (AAC) last summer and took up the role of public relations and communications for the group.

After many years of dreaming about a day when GVP alumnae would be able and willing to take up positions of leadership at our school, the AAC kicked off in May 2019. In our 2018-2021 Strategic Plan, we set down this dream in the form of goals, and then in the summer of 2019 turned those dreams and goals into realities with a core founding group of about 12 alumnae. Our School Counselor & SEL Coordinator worked with two incredible consultants, Jai Simpson-Joseph and Sumaya Karimi, to support the formation of the GVP Alumnae Advisory Council during a retreat weekend in early June. We hoped that with strong facilitation, the alumnae group would draw upon their own dreams and desires in imagining what their Alumnae Advisory Council could be and would do for the school and for themselves as alumnae with big futures in front of them. We wanted to offer GVP graduates the opportunity to learn about building a powerful group from the ground up–creating strategic goals, creating structures, maintaining a budget, building community, and more. But most importantly, we wanted them to imagine and create opportunities to lead, to be heard, and to influence and impact the future of our organization and our community.

When I watched the video from Nasteho for the first time, I was moved to tears. Her words were heartfelt and honest. She was radiant and reflective and certainly seemed ready to take on the world. I have always defined wisdom as knowledge gained through experience—not the stuff learned in books but earned through the living of life. That’s why it seems worth paying attention when someone so young has so much wisdom to share. When I hear Nasteho describing so powerfully her father’s insights, her belonging at GVP and among the Posse group, and her future hopes as a leader, I hear and can see the strength, resilience, and wisdom she possesses already as a graduating senior. And for me, it is emotional to witness and experience.

Over the past decade at GVP, I have had the privilege of meeting many young women like Nasteho who were wise beyond their years. They have already experienced things, people, and places that many adults never imagine having to know or learn. Although different and diverse in so many ways, these young women at GVP share histories of displacement, loss, and resettlement in new spaces. They know what it is to feel that you don’t belong and the hardships in building a new home. Nasteho said it so succinctly and so well when asked about what it is to be a refugee. She said, “It’s really hard to come here…but, me and my family were lucky enough to find GVP to be our community.” GVP is committed to being a strong and supportive village, family, and community above all else, and as Nasteho said, “even if you leave [we] are still with you…” Nasteho knows that she will not go to GW alone but as a Posse Scholar and GVP graduate with a powerful network of believers and supporters behind her.

I think about the wisdom we may be gaining through this COVID-19 pandemic and our shared experiences. I wonder what will remain with us, beyond the struggles and hardships, as new and important understandings for the future. I am hopeful for our future when I see and hear young people like Nasteho, who are ready to “lead with respect and openness.” I am hopeful for our school and community when I hear her say of the AAC, “It’s becoming bigger than I imagined it would, and I am excited about the things we are doing.” I am deeply grateful that even in difficult times, such as these, Nasteho radiates the light of wisdom for us all so that we might learn from the past and the present in order to dream a more beautiful future. Thank you, Nasteho, and thank you to all of the GVP alumnae who bring their wisdom to bear on the world to make it better for us all.

I invite you to watch Nasteho’s video if you haven’t seen it yet. It is beautiful, inspiring, and brimming with wisdom.