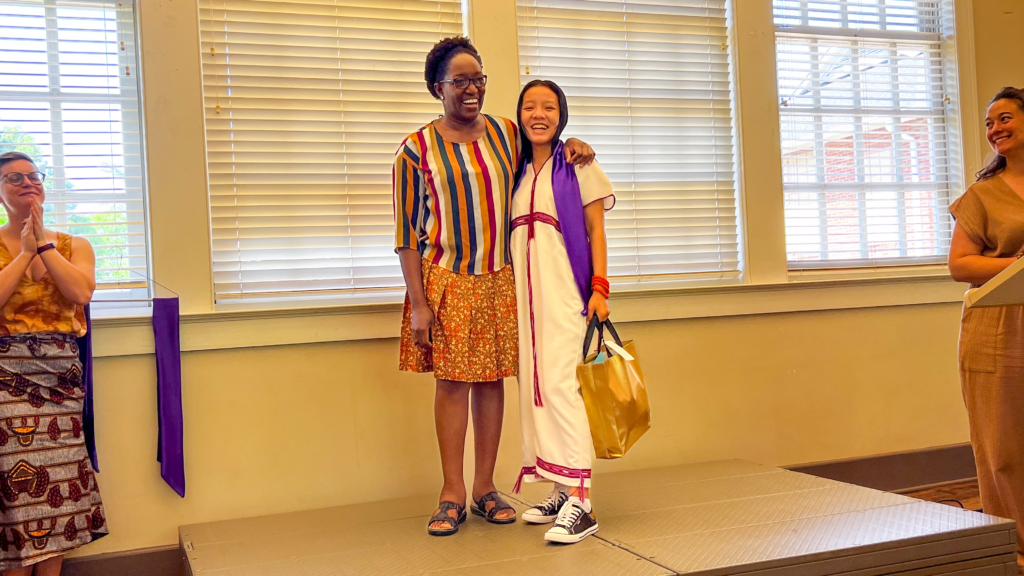 When girls start school at Global Village Project, they are often more reserserved as they step foot into the newcomer classroom with a mix of new cultures and languages. By the time they are Form Three (third year) students, they would have written their own monologues, performed in plays, and achieved academic and personal wins.

On Saturday, May 14, 2022, Global Village Project held its 13th annual graduation ceremony at the Clarkston Community Center. Seven students walked across the stage with bright smiles as their families, friends, mentors, and teachers cheered. Each student received a purple scarf, one of GVP’s earliest traditions. These silk scarves are hand sewn by fromer ESOL Specialist, Mary Lou McCloskey. The purpose is for alumni to know that they can always be found by their GVP school sisters in the future.

The ceremony also featured the Women’s Wisdom presentation. During the semester, students interviewed influential women in the community to tell her life story. In music class, the students and teachers worked to take the words and ideas of the interview to create a song for and about the interviewee. On graduation day, these same women were surprised with a song written by students based on their interview.

The ceremony concluded with a GVP family potluck, another GVP tradition. Delicious foods from different cultures were shared. From homemade banana bread, hummus and pita, and other delicious cookies and treats, it was a great weekend for celebration and fellowship for our GVP community.

We are immensely proud of our 2022 graduating class. The same students that started out in the newcomer classroom have now blossomed into great leaders. Continue to shine on!