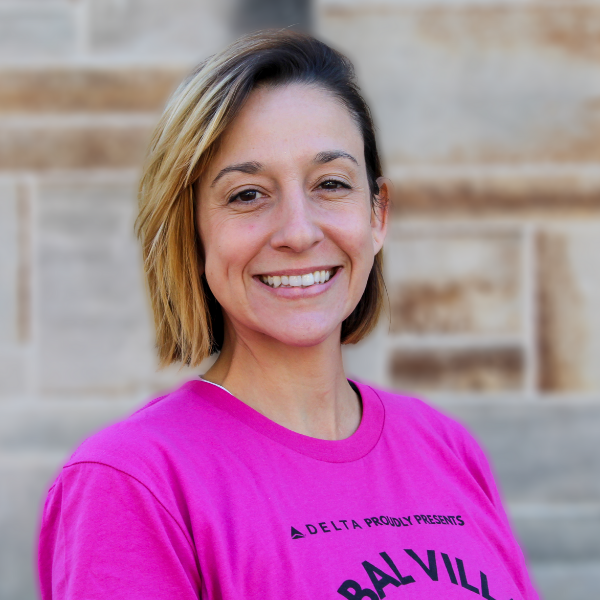 It’s a role that kind of found me rather than me finding the role.” In December 2021, Johna Meldau joined the GVP team as Newcomer Teacher to work with the first year students in Form One. Through a 12 year career working with students around the globe, Johna made her way to Decatur, GA at GVP — the only school in the U.S. educating refugee girls.

Johna grew up in Pawley’s Island, a small town in S.C. Her global career path started in 2009; unfortunately, this was not the best time for college grads to start their careers. After attending the College of Charleston and studying political science, it was difficult to make a transition into the workforce.

“I applied to a lot of jobs, and just nothing felt right,” she said.

An initial opportunity to run the Costa Rican branch of an ecotourism business led Johna to her first professional experience in the classroom. She began her English as a Second Language (ESL) training and worked as a substitute teacher in Costa Rica.

“It was kind of like a teacher’s assistant — teaching English along with their activities.”

Two and a half years later, Johna would make her way back to the U.S. where she found her motivation to pursue a career as an educator. “I really loved working in a classroom. I finished my ESL training, and I decided to apply for another ESL teaching position, and I got a position in Thailand.”

Johna spent four and a half years in Thailand teaching kindergarten.

“I loved my job from day one,” she said. “It was such a great experience because in a lot of Asian cultures, the teacher is so respected. You’re seen as such a valuable member of society, an integral part of the child’s life.”

Submerged in an educational culture that differed from one of the states, Johna also crafted fun in the classroom to truly connect with her students.

“I was so happy. Not only am I teaching them English, but they’re experiencing things for the first time — color shapes, different types of fruit. I like creating an environment that is loving and educational. I like giving them that space to freely express themselves.”

While in Thailand, Johna and her husband started an English Camp Program — a nonprofit organization training English teachers. They ran the English camp for schools for free, so teachers could get exposure to native speakers.

“And that’s when we started working in really rural areas and small villages. We worked with refugees. We worked at a lot of orphanages,” she said. “I am really moved by people who are facing challenges and still have that drive to learn even having limited resources or coming from sporadic learning journeys and not starting from the same point.”

Johna’s business venture sparked her passion to continue working with the refugee community.

“As I gain more and more professional experience teaching, I know exactly who I want to teach with.”

Johna continued to run the English Camps in Thailand, Cambodia, and Myanmar until 2016 when she took her passions for teaching to Georgia. Similar to her feeling about applying to jobs after graduating college, the teaching positions at the Georgia based schools still weren’t quite right.

“As much as I loved all of the children, I didn’t feel that I was in the right place. I’ve been on this journey to find the right fit for me.”

After meeting new people in Georgia and explaining what she loved to do and the population she loved to work with, a family at Johna’s former school mentioned Global Village Project.

Johna initially applied for the Newcomer Teacher position in 2020, but a call back in 2021 finally led her to the right fit.

“It’s a big lesson to not give up on your dream knowing that it’s the right fit for you and pursuing it even when you face challenges.”

It’s been one month since Johna has joined the GVP Team. So far, her favorite memory is not actually one that involves her teaching. Instead, it’s how open the girls have been to helping her learn.

“They explain things to me. They talk openly to me about their feelings. We’ve created this wonderful, safe space where I respect them and they respect me. They gave me honest feedback of what they needed from me in the first week, which is excellent. It helps me to better serve their needs.”

As she continues her role, Johna looks forward to seeing the growth of our first year students.

“You know, I just started, but I’m excited to see the growth in this classroom because I think there’s so much growth in the newcomer classroom from the beginning of the year to the middle of the year, till when they end the year. And my focus is cohesion and learning to love and respect each other, and in that, we’ll all help each other to academically succeed.”