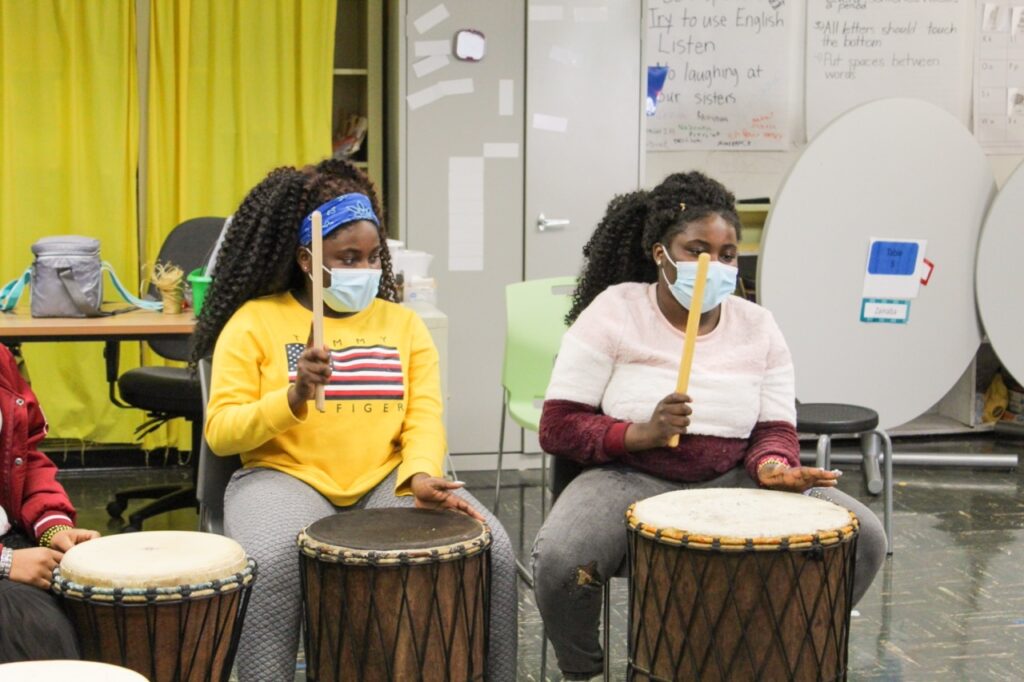 This month, I had the privilege of attending the West African Drum and Dance Camp, hosted by Community Sound.

Personally, and at GVP, lifelong learning is a core value. In this we believe that everyone is both a teacher and a student. I also believe that every teacher should take time to intentionally and formally be a student and take classes in something they want to learn. The act of pursuing new knowledge and skills puts into perspective the many experiences that our students have every day.

I take classes in music, arts, and the Spanish language. This May, I found myself at a beautiful retreat center in the North Carolina mountains, surrounded by djembes, dunduns, yoga, and dance.

My teachers were djembe experts, almost all men from Guinea. I learned about the many Guinean cultures and languages: the Malinke people, the Susu people, their songs and clothes and rhythms. I had an unforgettable experience and learned much more than just technical drumming skills.

I won’t forget my first class. It was from 7:30-9:00 pm. After a long drive, I was exhausted. But I was eager to see what classes would be like, so I went. My teacher, a tall, skinny Guinean man with the biggest smile I’ve ever seen, introduced me to many traditional rhythms. We learned probably 6 rhythms in that hour, plus some lyrics in Malinke. But what was most interesting was his teaching style: everything happened auditorily, in call and response, and using scat-singing like instructions. He’d point at us and say “diggi-diggi-da, diggi-da da da.” And we were to copy that with our drums.

I was completely overwhelmed. I even spoke to the camp organizer the next morning and said I might want to drop down to the beginner class because I didn’t think I could keep up. But ultimately, I decided to stick it out in my class.

Throughout the week I had many drum and dance teachers. And I took keen notice of their teaching styles: how much did they break down each rhythm? How much repetition was there before we moved on to a new part? How much was scat singing, versus explicit description of the sounds on the drum? For example, the three main sounds a djembe makes are called a bass, tone, and a slap. Some classes were easier or harder, but all were enjoyable.

At the end of the week, I took a class led by a white woman from North Carolina. She was clearly an expert not only in playing the music itself, but also the cultural differences in teaching and drumming. She described the difference between traditional ways of playing versus how we were playing.

But what shocked me was her teaching style: the way she broke up a complicated rhythm into many small pieces, (even used a LEGO analogy), wrote rhythms on the board, and moved at a slow pace. The same rhythm that I struggled with earlier in the week, I immediately “got” in her class. And I had this magical “aha” moment.

The cultural differences between my teachers and myself created a barrier for my learning. I had to focus, think, and work harder in classes taught by someone with a different language and culture than my own.

The connection to GVP was obvious. It reminded me of Dr. Cassie’s Cultural Competence and Humility Training. It reminded me how no one culture is “right,” but cultural differences can lead to discomforts and miscommunication. And at GVP, it’s up to our teachers, volunteers, and mentors to work to bridge that gap to make education accessible and equitable. Recognizing our students’ backgrounds is more than honoring their language through song, traditional clothes, and books that reflect their cultural stories. It’s continually interrogating the way we, as members of the dominant culture, can unknowingly perpetuate barriers. Instead, we must work to identify them and then construct bridges to enable our students to flourish.

And so, surrounded by the beautiful Blue Ridge mountains, I committed myself to continuing my journey of lifelong learning.