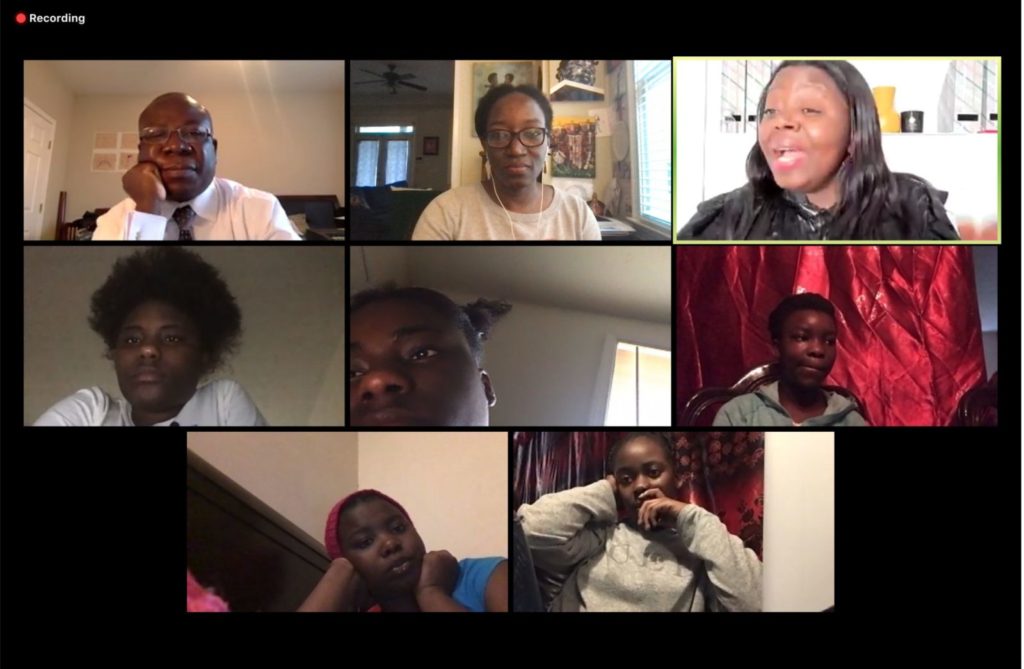 As part of our ongoing journey as a school to advance equity in education, GVP is constantly exploring ways to better equip our students for success, removing barriers to their learning and amplifying their voices as young leaders. One of these avenues is through exposure to role models, opportunities, and experiences that reflect theirs in multiple ways. This month, we were thrilled to welcome a remarkable woman to speak to a subset of our students during their advisory class.

Evelyne Ombeni is a Congolese lawyer at the International Court of Justice at the Hague, who specializes in war crimes and defending the rights of child soldiers and women victims of sexual violence. She is also a childhood friend of Mr. Crispijn Wilondja, GVP’s School Support Coordinator. It was an honor to have her join the class by Zoom to share her story with the students. Incidentally, all of the students in this advisory class happened to be African – from Tanzania and Congo, like Mr. Crispin – so the whole advisory was conducted in Swahili.

Ms. Ombeni talked about her own life growing up as an orphan in wartime Congo. She talked about her commitment to her education and how that was the game-changer. She told the students that she studied law so she could defend the rights of children of war and restore their right to education. She worked her way to The Hague, where she is now based as a law practitioner. She spoke directly to the students’ experiences as refugees and young women and encouraged them not to see those facts of their stories as handicaps, but rather as sources of empowerment: “Your identity should not be limited by the fact that you are a refugee,” she told them. “You are more than that. Your education is your right. Don’t temper your ambitions because you are a girl. If a boy can become president of a country, a doctor, or a pilot, so can you. You are just as smart and as capable.”

Ms. Ombeni’s story was a powerful reminder to our students that they are not alone, and that they are just as capable and brilliant as anyone else. The United Nations Sustainable Development Goals identify equity in education as a priority, and welcoming Ms. Ombeni to our advisory classroom was just one of many ways that GVP strives to make our classrooms more inclusive. While refugee learners often don’t get to see stories like theirs featured in traditional educational settings, GVP’s commitment to culturally responsive teaching means centering our students’ experiences, backgrounds, knowledge, and cultures in all aspects of learning. All students deserve to be exposed to role models who look and sound like them: Ms. Ombeni’s own experiences as a child, and how she used them to chart her path to success, offer students a potential roadmap for what is possible in their own lives.

Ms. Ombeni is already planning her next virtual visit to GVP. This time, she will be meeting with the whole school, and we are excited for her to share her story with all 50 of our students. We hope it inspires them to continue to dream big.

Diversity Equity and Inclusion in the GVP Workplace