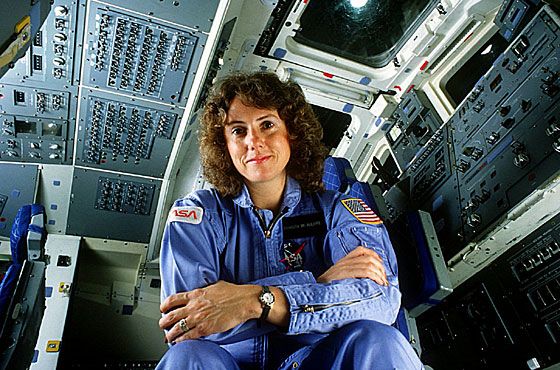 In January 1986, I was a fourteen-year-old girl, almost exactly the same age on average as our students at GVP, and I can vividly recall watching the Space Shuttle Challenger lift off at Cape Canaveral on a Tuesday morning at school. We all watched with excitement, and then time seemed to slow, as we started to realize that something unimaginable had happened. The explosion occurred only 70 seconds after takeoff. It was a terrible thing to see the smoke and to imagine what might be happening to the crew. Even as we watched with our own eyes, we couldn’t quite believe it.

I had been so excited to see a woman going up into space, and she was the first civilian invited to do so. Most importantly to me, she was a teacher! She was chosen from among thousands to be the first to teach from space. I remember tuning into the news leading up to the Challenger launch to hear what Christa McAuliffe, the American teacher, mother, and astronaut, had to say as she prepared for the voyage. I greatly admired her and her courage. I realize now that she was a powerful role model for me, an example of what might be possible for my future as a woman growing up in the US. She clearly understood this then. She knew that she was breaking down barriers and offering up new possibilities, as she said, “I have a vision of the world as a global village, a world without boundaries. Imagine a history teacher making history!”

Today, I still find it hard to believe that Christa McAuliffe was given the opportunity to join the seven member crew of the Challenger and that it ended so tragically in their deaths. But, I find so much hope in her vision of our world as an interconnected global village with endless possibilities. She recognized that teachers hold a particular power when she said, “I touch the future. I teach.” Christa McAuliffe understood that as teachers we have the power to reach, touch, and influence students and through them the future. She recognized the responsibilities that teachers have to support students in imagining new futures for themselves and our world. I love that Global Village Project was conceptualized in much this same way. I love knowing that we, too, are breaking down barriers and boundaries and making history in our own way. As the only school in the nation dedicated to educating refugee young women, we are also blazing a new trail.

Christa McAuliffe is still a role model for me—she embraced lifelong learning, risk-taking, determination, and big dreams. In education we often talk about the power of positive relationships and role models. At GVP, we take this to heart and put it into practice. In our community and parent agreements and in our employee and volunteer handbooks, we ask community members to agree to take up, practice, and model our Core Values of respect, responsibility, kindness, appreciation, and lifelong learning. They are values that we hold close and hold one another accountable to. When you come to the school, you can see them posted in every room as reminders. We understand the power of role models. At GVP, we all have opportunities to act as role models and examples. Our returning students are School Sisters for our new students. Our mentors are role models that help our students see themselves as successful high school students. During our career days, we meet and learn from diverse role models in a variety of professions.

Through our Women’s Wisdom Project–an interdisciplinary unit of study aimed at gathering wisdom from refugee women and building relationships among students and women in their community–we meet and learn from powerful role models in the refugee community. We complete a Women’s Wisdom Project every other year at GVP. In order to do this, our classes invite three refugee women to our school and interview them to learn about their lived experiences and journeys as refugee women resettled in the US. The students spend a great deal of time preparing for these interviews–generating questions and studying and practicing ihow to interview, often starting with their own family members. Once the interviews are complete, they are transcribed, and then for several weeks students work with Ms. Elise and the music team to create songs from the interviews. The unit culminates in a special performance event where students sing these songs for the wonderful women who shared their stories and lives with them. These wise women are also presented with printed texts of the songs to save. These performances end with many tears and hugs, as the process is intense, intimate, powerful, and profound for all involved.

GVP is committed to modeling our Core Values in all that we do and helping our students see beyond the barriers and boundaries set before them. We honor the women–like Christa McAuliffe, our teachers and mentors at GVP, and our wise refugee women–who are role models for other young women and open the doors to new ways of thinking and new possibilities. Below, I have included some of the words to two of our Women’s Wisdom songs, and I encourage you to follow the links to see all the words written by our students and teachers and to hear them sung. I also encourage you to join GVP in blazing new trails. In times like these, it seems more important than ever that we have positive role models and leaders to help us find our way towards the future.

I Used To Be A Girl Just Like You

I used to be a girl just like you.
I was born in Congo.
My dad is from the eastern part.
My mom is from Rwanda.

At home we speak English and French,
And so our children won’t forget
We also speak my husband’s language,
Kinyarwanda

When I call my mom, we speak Swahili
With my best friend, we speak Lingala
With my brother, we speak French (Nous parlons français)
I use all of my languages every day.

“I Used to Be a Girl Just Like You” | Elise Witt

Hala, Hala, Ms. Hala says
Find out what you want and do it
You can choose the way you live
It doesn’t matter where you are from
Find out why you’re here

Hala, Hala, Ms. Hala says
We all need to learn from each other
We have to be a little bit of everything
We can all do it
My dream is for you

I am American and Syrian
A little French and Spanish, too
I hope we all get to be this way
This dream is for you

I’ve had many jobs, studied medicine in Egypt
Worked my family business in textiles
I started my own company making baby clothes
Hey! That’s my working life!