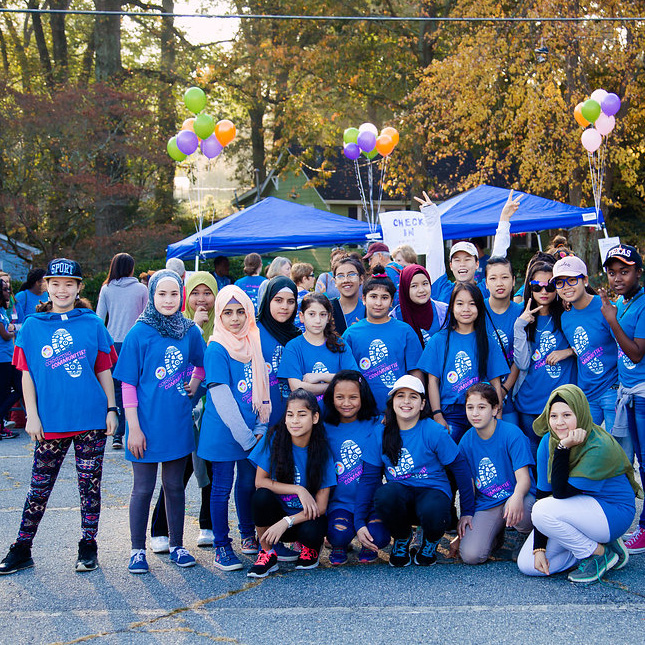 What is it like to take your first steps in a new country? This summer, Global Village Project (GVP) invited local friends to “Walk with Her,” a GVP student, to answer that question from the perspective of a refugee who has recently been resettled in Clarkston, Georgia.

A refugee resettlement hotspot since the late 1990s, the small town of Clarkston, GA is one of the most diverse cities in the country. About half of Clarkston’s population is foreign-born, and they collectively represent over 40 different nationalities. Among those inhabitants are the 35-45 students who attend GVP each year and their families, for whom GVP and Clarkston often define the beginnings of their new lives in the US. Ehsoe, an alumna who graduated from GVP in 2014, explained in a recent interview, “Without Global Village Project, I wouldn’t be Ehsoe. I wouldn’t be here at Academe of the Oaks. I wouldn’t be here at Furman University. So that’s the very first step of my life in this country.”

This month, GVP’s World Refugee Week campaign aimed to celebrate the stories of Ehsoe and her GVP sisters, who include the more than 250 young women who have completed GVP’s program since its founding in 2009. In sharing their stories, we strived to highlight the ongoing crisis of global displacement which has produced over 26 million refugees worldwide. For friends new and old, World Refugee Week was a chance to affirm together: “We cannot walk alone.” What better way to make this a personal truth than a creative and engaging journey here in the place that so many GVP students and alumnae call home: Clarkston.

During the week of June 20-26, community members and visitors made stops at six refugee-serving organizations in Clarkston. All partners of GVP, these locations play a vital role  for refugees taking those “first steps” in this new country. Last week, participants in the “Walk With Her” journey through Clarkston were able to learn more about the mission of each organization while following a narrative that represents the “first steps” of so many GVP students. You can read just a sample of that narrative below:

At Refuge Coffee, our GVP student meets up with a friend whose older sister serves coffee as a trainee in the Job Training Program. Just one block over is Clarkston Thriftown, where she picks up groceries with her mom. From those two locations, one can head to Ethne Health Clinic, where our student has appointments with Doctor Esther Kim – a physician who has presented at her school the past two STEAM Career Days!

Heading “across town” to the Clarkston Library, our GVP student checks out a new fantasy series recommended to her by the librarian. On her way out, she passes the Clarkston Community Center where family members and friends attend classes for everything from Martial Arts to Citizenship. Finally, she hits the Jolly Avenue Garden run by Friends of Refugees, where her grandmother tends the family plot, and a GVP alumna interns as a “Growing Leader” this summer.

No matter what exactly our first steps in a new country look like, we cannot walk alone. Those of us who have been here longer have not only the opportunity, but the responsibility to walk with newly arrived refugees – young women like Georgette, Blandine, Benedith, and Ehk Paw, whose stories you can follow along with through GVP’s new corresponding “Walk With Her” digital journeys.

As Blandine says, “Being a refugee is hard. It’s a lot of experiences, a lot of new things, new change, new country, new friends.” If you’d like to support the refugee learners at GVP in their journeys and new beginnings year-round, we invite you to consider becoming a sustaining member at GVP today.

Moments on the Trail: A Trip to the Hike Inn

Honoring the International Day of Education in a Pandemic