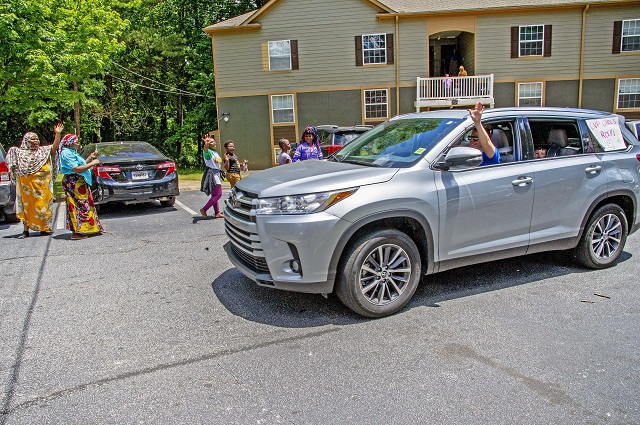 Above: GVP staff wave to families from inside their cars. Photo by Dean Hesse of Decaturish.

Like many schools across the country, Global Village Project was not able to hold our traditional ceremony for students transitioning to high school this year – but that didn’t mean they graduated without a celebration!

On the afternoon of Saturday, May 16th – the day after students’ last day of classes – GVP teachers and staff pulled up to the parking lot of the school in cars decorated with signs and streamers. They set out for Clarkston in succession, a parade over ten cars long, en route to meet graduating GVP students and their families at their homes. Led by the Global Village Project bus, the parade charted a course through apartment complexes in Clarkston. The festive caravan stopped by the home of every graduating student to share big smiles and waves, shouts and honks of celebration, and an abundance of joy.

The graduation car parade was part of GVP’s commitment to finding innovative ways to honor students in spite of the restrictions imposed by the pandemic. We celebrated the last day of school with an all-school Zoom party that featured an awards ceremony, music, and dancing. Graduating students also received goodie bags, including handwritten cards and journals, that were distributed through deliveries later in the month. All in all, the GVP family was determined to recognize and celebrate the achievements of our students, who have worked so hard to overcome the barriers they face. As Dr. Amy Pelissero, Head of School, stated, “We’ve had to apply new innovations to honor the students who fought so hard to arrive at this moment of graduation. Our students’ accomplishments will not go unrecognized.” 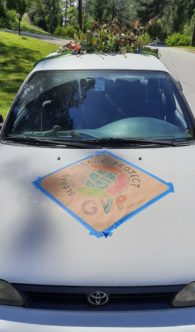 The GVP car parade proved to be a hit not only with students and families, but also with many other members of the Clarkston community. As the GVP bus rolled into each apartment complex, students, families, and other residents alike rushed out to snap photos and wave, sharing in the excitement of celebration. Several GVP team members later remarked that it was very moving to be able to share this moment of collective joy with so many others. That the car parade was a morale booster and a chance for connection, during a time when the weight of quarantine and social isolation has been so palpable, ended up being as important as the graduation celebration itself.

The activities that this year’s graduating class missed out on still mark a very real loss for students, and pending the resolution of public health concerns, we do hope to be able to hold an in-person ceremony for GVP’s class of 2020 at a later date. For the time being though, the graduation parade was a very “GVP” display of love, pride, and appreciation for students – a reminder that even from afar, the GVP community is here to support and celebrate with them. As School Support Specialist Mr. Crispin Wilondja remarked, “Just to see teachers, THEIR TEACHERS coming to their apartment complex to see them is powerful, and they will keep that forever.”