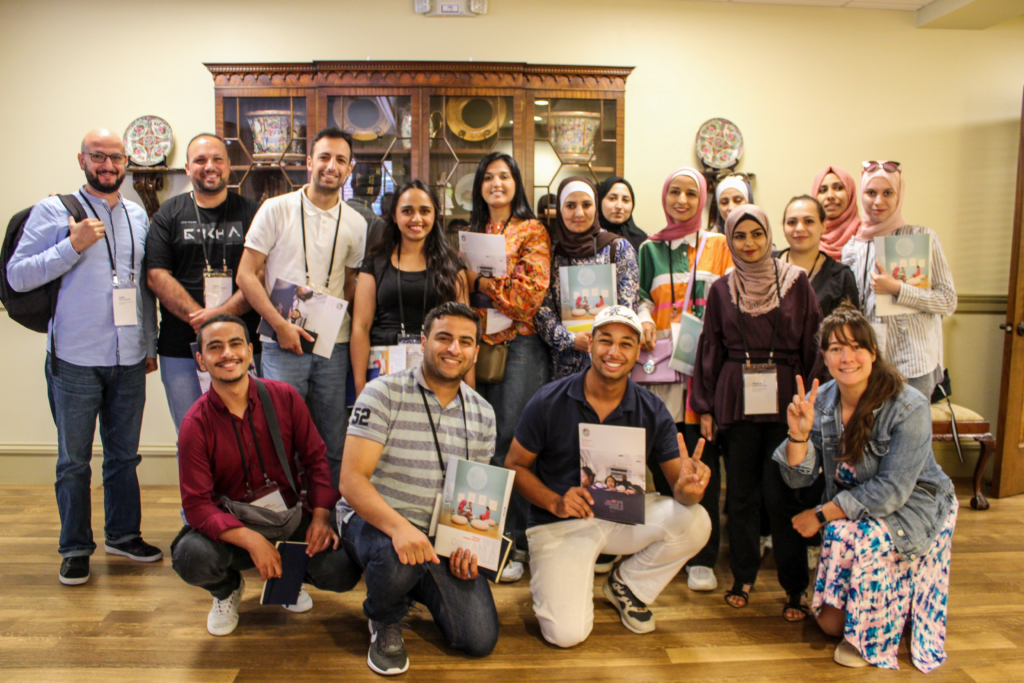 Global Village Project welcomed a delegation of 16 Jordanian English teachers to our school on Tuesday, Aug. 16. They were received by Director of Education & Impact, Dr. Cassie Leymarie, who gave the group a tour of the school. The visitors walked curiously through the hallway gazing at student artwork on the walls and saying hello to teachers and students.

The group was part of a U.S Department of State grant program that created a partnership with faculty from Georgia State University (GSU) and University of North Georgia (UNG) for the past ten months. During that time, 40 English teachers from underrepresented and underdeveloped schools in Jordan were selected to take part in Teaching English as a Foreign Language (TEFL) online courses during fall 2021 and spring 2022. In June, faculty from GSU and UNG traveled to Jordan and delivered workshops and seminars to the 40 teachers at the University of Jordan. GSU identified 15 from the 40 participants as “Ambassadors” to visit the U.S. to receive instruction on the train-the-trainer model, visit elementary, middle, and high schools in Gainesville and Atlanta and go to some local cultural and historical sites in order to learn more about American society and culture.

The immersive education experience brought the Ambassadors to GVP’s doors. During their visit, Dr. Cassie made a presentation on GVP’s four programmatic pillars and the school community’s focus on social emotional learning. The country of Jordan receives large numbers of refugees from Syria, and GVP’s model provides options for interrupted education. The delegation enjoyed lunch with the students and thereafter split up to observe music, science and social studies classes. “This was my first music class, and I don’t think it will be my last!” said one of the teachers at the end of class.
The visit ended with a post-observation Q&A session with GVP’s leadership team, during which time they asked about the school’s history, future plans and funding models. The guests said they were pleased to see the practices they learned about in their TEFL courses in action, such as Total Physical Response, a method of teaching language or vocabulary concepts by using coordinated physical movements, and student-centered activities.

The fifth pillar of GVP’s current strategic plan focuses on the replication and scale of the GVP model and so visits such as this one respond to this strategic priority for the organization.