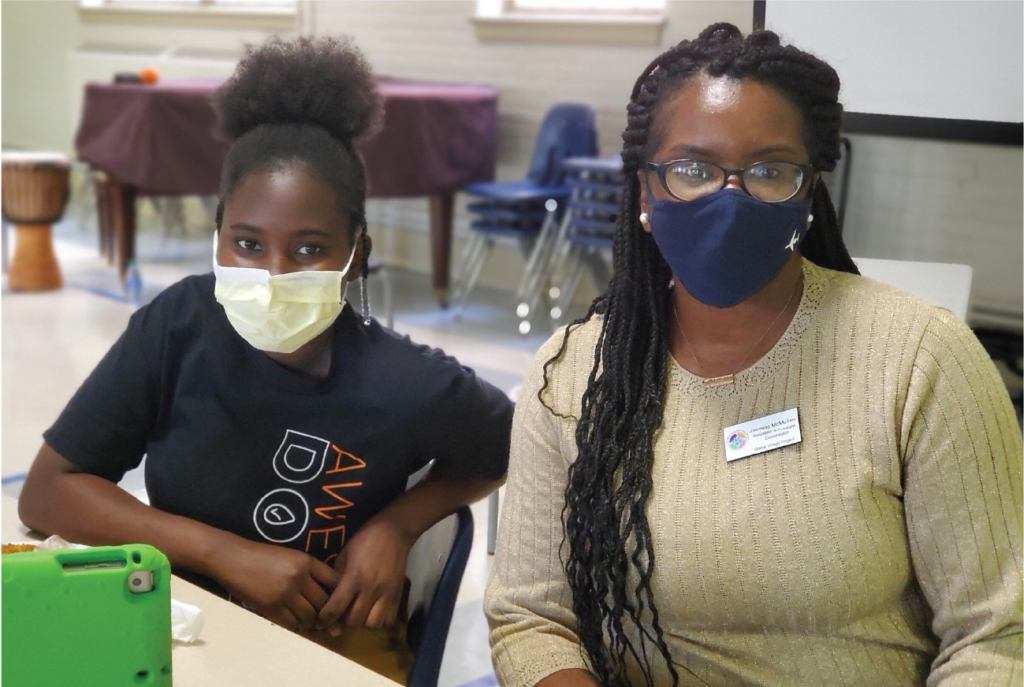 In April this year, we were thrilled to welcome Jazmine McMullen to the team as GVP’s new Volunteer and Program Coordinator. In her new role, Jazmine is excited about the opportunity to support volunteers in contributing their strengths to GVP’s work and finding fulfillment in their service.

Jazmine brings a wealth of expertise to the GVP team, having served youth and volunteers in multiple capacities over her career. Hailing originally from Brunswick, GA, Jazmine moved to Los Angeles after earning her Bachelor’s and Master’s degrees in Social Work. Her roles at the Youth Policy Institute and the Los Angeles Youth Network gave her the opportunity to work with young people who – much like GVP students – have experienced interrupted education, often due to housing instability and other barriers. Jazmine went above and beyond in her dedication to providing support, taking it upon herself to track down students’ transcripts and other documentation in order to ensure they could continue their education. She became a strong proponent of proactive and vocal advocacy for marginalized populations.

In 2018, Jazmine returned to Georgia to work at the Center for the Visually Impaired, but she says she felt that “something was still missing” from her professional life. That’s when she found GVP. Jazmine felt compelled to get involved because of the groundbreaking nature of students’ educational journeys, as she herself knows what it’s like to be a “first”: “The girls’ refugee experiences really resonated with me because I was the first person in my family to pursue and complete higher education.” Jazmine describes navigating the barriers and pressures of being a trailblazer as “a unique experience for each person, but also a shared experience that is really close to my heart.” This passion has only furthered her desire to enrich the relationships between volunteers, students and teachers in her role at GVP.

One lesson that has remained consistent for Jazmine is the importance of humbly meeting people where they are. “We have to trust that they are the experts of their lives,” she says. “They’re driving their own ship; we are simply trying to offer a road map to those who would allow us to be along for the ride.” As someone who also regularly volunteers with youth in her personal life, she says it should be “a reciprocal process — we are able to learn a lot from them as well.” Jazmine feels it is important for children to know that there are many ways to be successful, and she loves seeing a student accomplish something they never thought they could.

In less than two months at GVP, Jazmine says she has already been impacted by the level of commitment from all who take an active role in making the school’s impact possible, especially volunteers. She believes “time is one of the greatest things we can sacrifice,” adding, “I’m touched by how GVP has cultivated a community where volunteers come back every year.” She aims to build upon this tradition by connecting the dots between the needs of all stakeholders and amplifying the leadership of the new Volunteer Support Network through robust training and recruitment. “We already have a lot of volunteers with great wisdom, resources, and experience, so I’m eager to just fill in the gaps as far as certain skills or knowledge that would make them even more effective.” Lastly, she also hopes to continue to diversify the volunteer base: “It is important to me that the Volunteer Support Network is reflective of GVP’s culture and community, not just with respect to race, gender, and socioeconomic status, but also taking into account the unique qualities and characteristics each and every one of our volunteers brings to GVP.”

When asked about herself, Jazmine stated, “I don’t talk much. I try to let the work speak for itself.” One exception, though, is when she discusses a scholarship she created at her high school alma mater, Glynn Academy in Brunswick. “That was something I was really proud of doing because if I had not received a scholarship, I probably wouldn’t have been afforded access to a quality education. It was really important for me to pay it forward once I was in a position to do so.” As for personal hobbies, she really enjoys playing basketball, which she even played semi-professionally in college!

Still, Jazmine is quick to turn the attention away from herself and back to the incredible students at GVP. Her favorite moment so far? “I always enjoy hearing the students sing in Ms. Elise’s class. Seeing the Rising Scholars give their end-of-year presentations was also very powerful…At that age, I didn’t even have the courage to voice my feelings on these things which are so significant, especially in a room full of adults. It was a great reminder to me as an adult of the work these girls are doing to truly be the change they want to see in the world.”